PNW exporters and Canadian exporters have seen an excellent run of business this week, but exporters at the gulf are not seeing any business despite the break in flat price. In fact they say “there are no consumptive buyers but there are no sellers either”, shippers/warehousemen are content to carry their wheat for the storage revenue. SE Asia and some LAM business has been seen from the PNW & Canada; Vietnam, Korea, Japan, Indonesia, Bangladesh, Thailand have all been buyers but I didn’t get the LAM players of Canadian wheat. My rough guess was 300 kmt was sold from the PNW this week while the high basis at the gulf is still encouraging Mexico and others to Russian wheat into new crop with intention to blend with CWRS.

The gulf HRW market was quiet today after some trades between shippers & resellers earlier this week, and the cash basis is called unchanged but other than in the March slot the tone is weak. The HRW domestic market was up 3-9 ct/bu with most interest for the lower proteins. The domestic NS/DNS market closed higher today as well with more reports of draw down in the domestic mill pipeline a result of poor railroad performance and lack of grower sales. The PNW market has seen a lot of export wheat business this week yet exporters claim the delivered basis is unchanged, but when quizzed they admit bids are 5-10 ct/bu better than the quotes. Logistics continue to be the biggest driver of cash values for March & early April positions.

Weather is on everyone’s radar and the drought monitor didn’t show any improvement from the previous week.  See USDM map below sourced from http://droughtmonitor.unl.edu/ 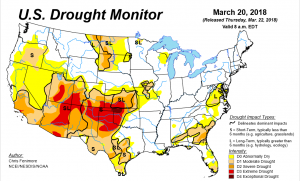 USDM Highlights Conditions in the HRW belt saw little improvement from last week despite the recent rains. In the South, moderate drought expanded in western and southern Texas. Severe drought was expanded in western Texas. In the High Plains, recent precipitation removed abnormal dryness (D0) in northern Nebraska and western Minnesota. Moderate (D1) drought was reduces in central N. Dakota and extreme (D3) drought expanded in southern Colorado. Surprisingly, both Kansas and Oklahoma conditions did not change a percent from the previous week!

The dryness in key HRW states has been compared to the dry conditions last year which was cured by heavy rains in the spring. The weather conditions continue to change and this afternoon the rain that was once pushed into the Southern Plains disappeared. The USDM D2-D4 drought conditions now cover 56% of Kansas, 42% of Oklahoma (100% of the OK Panhandle, 97.5% of North Central, 81% of Southwest), 25% of Texas (94% of the TX High Plains).

In Kansas, D2-D4 conditions have not been this bad since the 2013/14 marketing year when percent harvested was cut to 88%.

In Oklahoma, conditions have improved across most of the state as February heavy rains fell in the eastern regions. Conditions in the Panhandle have remained unchanged at 71% extreme (D3) and 29% exceptional (D4) drought, the worst it’s been since 2013/14 marketing year when percent harvested was 28%. In southwest Oklahoma conditions have improved slightly since February however 81% of the area is still in severe-extreme drought, the worst since 2014/15 marketing year when percent harvested was 46%.

Like Oklahoma, Texas has seen improved state wide drought conditions since February however most of the wheat is grown in the Plains. The High Plains has 95% of the area in D2-D3 drought similar to 2013/14 marketing year when % harvested dropped 30%. In the Low Plains, 75% of the area is in D2-D3 drought conditions similar to 2014/15 when percent harvested dropped 10%.

We use cookies on our website to give you the most relevant experience by remembering your preferences and repeat visits. By clicking “Accept”, you consent to the use of ALL the cookies.
Cookie settingsACCEPT
Manage consent

This website uses cookies to improve your experience while you navigate through the website. Out of these, the cookies that are categorized as necessary are stored on your browser as they are essential for the working of basic functionalities of the website. We also use third-party cookies that help us analyze and understand how you use this website. These cookies will be stored in your browser only with your consent. You also have the option to opt-out of these cookies. But opting out of some of these cookies may affect your browsing experience.
Necessary Always Enabled
Necessary cookies are absolutely essential for the website to function properly. These cookies ensure basic functionalities and security features of the website, anonymously.
Functional
Functional cookies help to perform certain functionalities like sharing the content of the website on social media platforms, collect feedbacks, and other third-party features.
Performance
Performance cookies are used to understand and analyze the key performance indexes of the website which helps in delivering a better user experience for the visitors.
Analytics
Analytical cookies are used to understand how visitors interact with the website. These cookies help provide information on metrics the number of visitors, bounce rate, traffic source, etc.
Advertisement
Advertisement cookies are used to provide visitors with relevant ads and marketing campaigns. These cookies track visitors across websites and collect information to provide customized ads.
Others
Other uncategorized cookies are those that are being analyzed and have not been classified into a category as yet.
SAVE & ACCEPT
Don't Leave Yet!

Have You Signed Up For Your FREE Trial Yet?

There’s No Credit Card Required and We Never Sell Your Information.  Sign Up And See What You’ve Been Missing!

Our Cash Wheat Report provides a valuable daily commentary on global cash wheat values and is distributed electronically to subscribers.